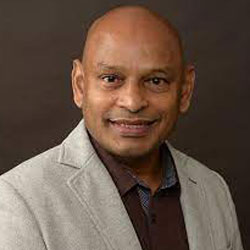 Professor Seeram Ramakrishna, FREng, Everest Chair is among the top three impactful authors at the National University of Singapore, NUS (https://academic.microsoft.com/institution/165932596/authors?pi=1). NUS is ranked among the top five best global universities for engineering in the world (https://www.usnews.com/education/best-global-universities/engineering. He is an elected Fellow of UK Royal Academy of Engineering (FREng); Singapore Academy of Engineering; Indian National Academy of Engineering; and ASEAN Academy of Engineering & Technology. He is also an elected Fellow of American Association of the Advancement of Science (AAAS); ASM International; American Society for Mechanical Engineers (ASME); American Institute for Medical & Biological Engineering (AIMBE); Institution of Mechanical Engineers, IMechE and Institution of Materials, Minerals & Mining, IoM3, UK; ISTE, India; and International Union of Biomaterials Science & Engineering (FBSE). He is senior member of IEEE. He received PhD from University of Cambridge, UK. Among numerous recognitions he received are: Honorary Everest Chair of Nepal (https://mbustb.org/member_cat/honorary-chair/); Honorary Engineering Doctorate, Central University of Technology, South Africa; Asia Polymer Association Distinguished Researcher Award, International Federation of Engineering Education Societies President award- Global Visionary; Global Engineering Dean's Council Ambassador; ASEAN Outstanding Engineer Award; Institute of Engineers Singapore Prestigious Engineering Achievement Award; IIT Madras Distinguished Alumni Award, UK Cambridge Nehru Fellowship, and Singapore Lee Kuan Yew Fellowship. Thomson Reuters identified him among the World’s Most Influential Scientific Minds. His Google Scholar H-index is ~ 160 and citations ~ 114,000 (https://scholar.google.com.sg/citations?hl=en&user=a49NVmkAAAAJ&view_op=list_works&sortby=pubdate). Clarivate Analytics recognized him among the Top 1% Highly Cited Researchers in the world in materials science and cross-fields categories. Microsoft Academic ranked him among the top 25 authors out of three million materials researchers worldwide based on H-index (https://academic.microsoft.com/authors/192562407). Listed among the top three scientists of the world in Biomedical Engineering as per the Stanford University researcher study on career-long impact of researchers or c-score (https://drive.google.com/file/d/1bUJrvurVVBbxSl9eFZRSHFif7tt30-5U/view). He is an Associate Editor of eScience journal (http://www.keaipublishing.com/en/journals/escience/editorial-board/). His academic leadership includes NUS’s Vice-President (Research Strategy); Dean of Faculty of Engineering; Director of NUS Enterprise; Director of NUS Industry Liaison Office; Director of NUS International Relations Office; Founding Director of NUS Bioengineering; Founding Co-Director of NUS Nanoscience & Nanotechnology Institute. $100 million Global Water Center by General Electric established under his watch as the Dean of Engineering. As a founding Chairman he championed the establishment ~ $100 million Solar Energy Research Institute of Singapore, SERIS. He served as a board member of several national organizations, policy institutes, and tertiary education institutions. He founded the Global Engineering Deans Council (http://gedcouncil.org/ambassadors) while serving as the Vice-President of International Federation of Engineering Educator Societies (IFEES). European Commission Director-General for Environment, Excellency Daniel Calleja Crespo said "Professor Seeram Ramakrishna should be praised for his personal engagement leading the reflections on how to develop a more sustainable future for all" in his foreword for the Springer Nature book on Circular Economy (ISBN: 978-981-15-8509-8). He is a member of UNESCO’s Global Independent Expert Group on Universities and the 2030 Agenda (EGU2030). He authored the book The Changing Face of Innovation. He is a renowned speaker on higher education and innovation trends worldwide. 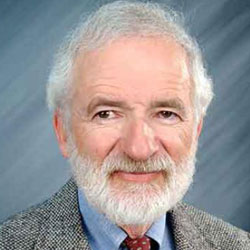 Dr. Nozik has established a leading position in the interdisciplinary fields of photoelectrochemistry, semiconductor-molecule interfaces, quantum size effects and electron relaxation dynamics in semiconductor quantum wells, quantum dots, quantum wires, and nanostructures, and applications of this science to solar photon conversion technologies. He has published over 270 peer reviewed papers, proceedings, and book chapters in these fields and in the related fields of photocatalysis, heterogeneous catalysis, the optical, magnetic and electrical properties of solids, and Mössbauer spectroscopy, and has presented > 375 invited talks. He has led a large group of scientists engaged in basic and applied research on the direct photoconversion of light into chemicals, fuels and electricity, and on the optical and electronic properties and applications of nanostructures. Dr. Nozik has been awarded 11 U.S. patents and has received many honors and awards.

Prof. Stephen Evans, Graduated in Physics from Queen Mary College London and obtained his Ph.D. on LB Superlattices of Porphyrins at Lancaster University. He subsequently held undertook postdoctoral work at Imperial College London and was a visiting Scientist at Eastman Kodak, Rochester. In 1991 he moved to the School of Physics and Astronomy, at the University of Leeds where became Professor of Molecular and Nanoscale Physics in 2002. Since 2000 he has held posts as Deputy Director of the multidisciplinary Centre for Self-Organising Molecular Systems (SOMS), the Nano Manufacturing Institute and has been the head of the School of Physics & Astronomy. He currently heads the Molecular and Nanoscale Physics group and is the Deputy Head of Physics and Astronomy. 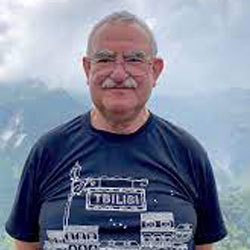 Prof. David Tomanek is an Emeritus Professor of Physics at Michigan State University. He is known for predicting the structure and calculating properties of surfaces, atomic clusters including the C60 buckminsterfullerene, nanotubes, nanowires and nanohelices, graphene, and two-dimensional materials including phosphorene. 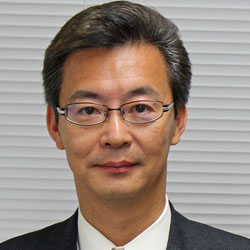 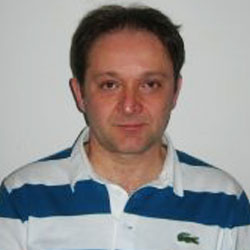 Prof. Vincenzo Guidi is full professor and Department Director and IUSS Director at University of Ferrara, Italy. He has published more than 80 articles in reputed journals and has hindex of 55. He has given numerous invited and keynote talks at national and international conferences. 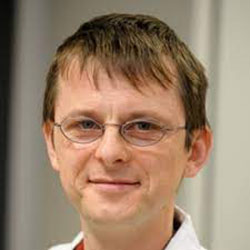 Prof. Andreas Schnepf a Professor at Tubingen University, Germany. Prof. Schnepf’s research work is focused on Preparative Co-Condensation: Synthesis of metastable solutions of unusual gas phase molecules like GeCl and Synthesis and characterization of metalloid gold clusters. He has received several awards and honors, including Book price of the fund of the chemical industry in 1987. 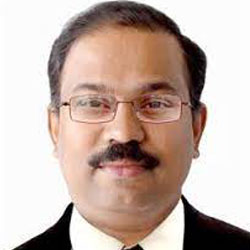 Prof. Vasudevan P. Biju studied chemistry at Kerala University and received his PhD degree with Dr K. George Thomas. Then, he was a Postdoctoral Fellow at National Institute of Advanced Interdisciplinary Research, Japan, a JSPS Postdoctoral Fellow at Nanotechnology Research Institute, National Institute of Advanced Industrial Science and Technology (AIST), Japan, and a Postdoctoral Fellow at Fundamental Science Directorate, Pacific Northwest National Laboratory (PNNL), USA. His postdoctoral research included spectroscopy and microscopy of single-molecules and nanoparticles. Following this, he was invited to National Institute of Advanced Industrial Science and Technology (AIST), Japan, in 2004 as a tenure track scientist, becoming a tenured scientist in 2008 and a chief scientist in 2009. He is also taking (2007) a Visiting Scientist position at Department of Chemistry and Biochemistry, the University of Texas at Austin, and a Visiting Professor position (2007~) at center for arthropod bioresources and biotechnology, Kerala University. His current research interests include development of nanoparticles and bioconjugated nanoparticles, and exploitation the optical properties of nanobioconjugates towards unraveling of biophysical functions and structures of biomolecules in cells. He is the recipient of 14th Hiraga Gennai Award by the Ozaki Foundation, Japan, and the Young Asian Chemist Award by the Chemical Society of Japan. 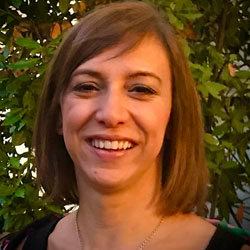 Dr. Francesca Maestrelli is an associate professor at the University of Florence, Italy. Her research area are: Development, characterization and evaluation of solid dispersions and mechanical activated systems realized with polymeric carriers and drug – cyclodextrin complexes. Study of innovative formulations aimed to the realization of drug delivery systems such as colloidal systems, liposomes, nanoparticle and microbeads containing drug – cyclodextrin complexes 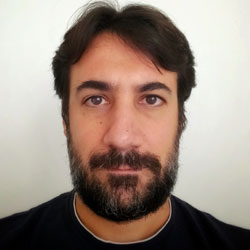 Dr. Riccardo Di Corato, PhD in Science and Interdisciplinary Technologies, is a researcher at CNR-IMM, Lecce Unit. His research activities involved the development of a new procedure to obtain magnetic nanostructures based on the controlled clustering of nanocrystals (EU patented); the development of magnetic liposomes for hyperthermia treatment and photodynamic therapy; the preparation of multi-cellular scaffolds for tissue engineering; the study of the effects of cellular internalization on nanoparticles properties; the synthesis of magnetic nanoparticles for biomedical imaging. He is currently appointed as Topic Editor for "Applied Science", MDPI. 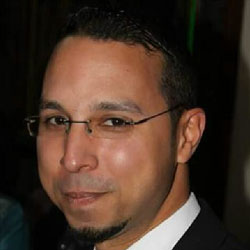 Dr. Bilel HAFSI is an associate professor at IMM-CNR, Italy and is a member of NCM group since 2021. His research background is in organic electronics, physics, computer modeling, and self-assembly processes, with the focus of utilizing those to create new functional materials as the building blocks of novel soft-electronic devices. During his PhD, he has developed Nanoparticles organic memory field effect transistors (NOMFETs) at the Institute of electronic, microelectronics and nanotechnology (IEMN) with the guidance of Prof. Kamal Lmimouni and Prof. Adel Kalboussi, combining skills and knowledge in both nanotechnology (Electrical Eng.) and Materials Eng. 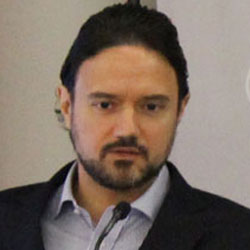 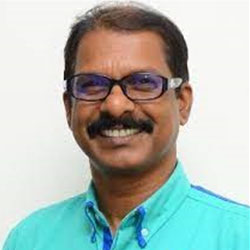 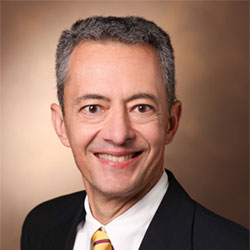 Todd D. Giorgio, Ph.D., P.E. is Professor of Biomedical Engineering and Professor of Chemical and Biomolecular Engineering at Vanderbilt University. His research is primarily focused on the quantitative understanding of complex biological system interactions, especially with gene and drug delivery materials. His recent work includes a strong focus on nanoscale materials and their applications to the solution of problems in biology and medicine, characterized as ‘nanomedicine’. Delivery of cancer therapies using ‘smart’ vehicles responsive to specific characteristics of the in vivo environment and nanomaterials for the modulation of cancer immunology are current initiatives in the Giorgio laboratory. He is a co-founder of an early-stage nanotechnology-based company (BioNanovations) devoted to real-time detection and characterization of bacterial infection, including sepsis. He is an elected Fellow of the Biomedical Engineering Society (BMES) and an elected Fellow of the American Institute for Medical and Biological Engineering (AIMBE), an organization advocating for the value of medical and biological engineering to society. He has held elected positions on the Board of Directors of both BMES and AIMBE. Dr. Giorgio served as Chair of the Department of Biomedical Engineering at Vanderbilt University for nine years. He is a registered professional engineer in the State of Tennessee. He received his Ph.D. from Rice University and his B.S. from Lehigh University, both in chemical engineering. 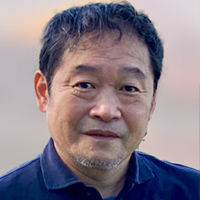 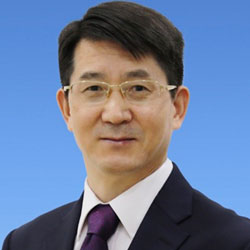 Baojun Li is a Distinguished Professor and Head of Institute of Nanophotonics in Jinan University, China. He received his Ph.D from Xi’an Jiaotong University in China in 1998. After that, he worked at Fudan University in Shanghai, China, as a Postdoctoral Fellow till 2000. From 2000 to 2002, he worked at Singapore-MIT Alliance, first as a Postdoctoral Fellow, then as a Research Fellow, with Professor Soo-Jin Chua from National University of Singapore and Professor Eugene A. Fitzgerald from MIT. From April to October 2002, he worked at Institute of Materials Research and Engineering in Singapore as a Research Fellow. In 2002, he joined Sun Yat-Sen University in China as a full Professor and served as a Director for Research Laboratory for Optoelectronic Integration in State Key Laboratory of Optoelectronic Materials and Technologies. From May to November 2009, he worked at University of Oxford as a senior visiting scholar with Professor Michael B. Johnston. Then, he came back to Sun Yat-Sen University as Cheung Kong Scholar Distinguished Professor and served as a Dean of School of Physics and Engineering. In July 2016, he moved to Jinan University in Guangzhou, China, where he founded Institute of Nanophotonics and currently serves as Director. In 2020, he was elected as Fellow of Chinese Optical Society. In 2021, He has been listed as one of Highly Cited Chinese Researchers by Elsevier. 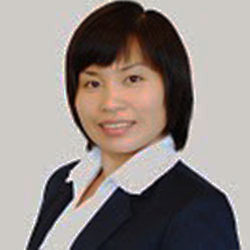 Dr. Nattakan Soykeabkaew received her D.Phil. from Queen Mary, University of London in 2007 and continued to work as a postdoctoral researcher in 2008 before leaving the UK and went back to Thailand to resume her lecturer position at School of Science, Mae Fah Luang University. Her current research interest includes 1) Agricultural Waste and Biomass Utilization, 2) Cellulose-Based Material, 3) Nanocellulose, 4) Nanocomposite, and 5) Sustainable Packaging. She is currently working as the Head of the Center of Innovative Materials for Sustainability (iMatS) at Mae Fah Luang University. 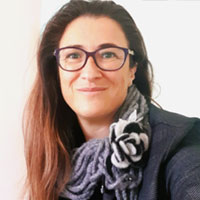